In the far north of New Zealand I had my much desired opportunity to collaborate with a local traditional artist, an experience which became a defining moment on the journey and has fueled our desire to return to NZ for a much larger project. All photos by Jonathan Clark. 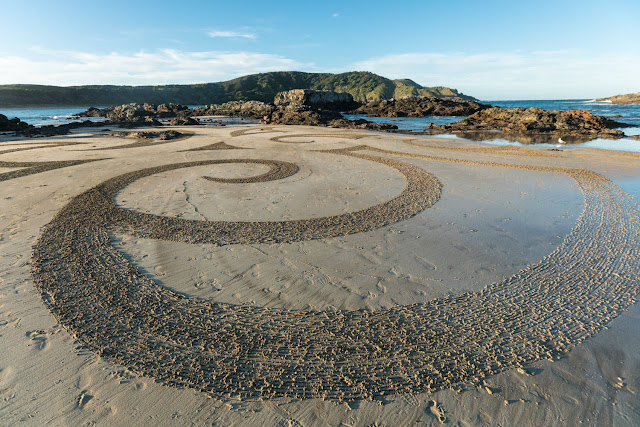 While scouting a beach near Matauri Bay, north-east of Aukland, we were approached by a local man who said he was the guardian of the beach. He had seen my rakes, which I had brought out to the beach to test the sand, and felt suspicious. After explaining our project, the man said we should get permission from the tribal elder and told us where to find him.

Out we drove to the local Marai (the Maori community house) perched on a ledge above Piapia beach, where the elder, a man named Sailor Morgan, was working. We explained our interest in making art on the beach and showed him past work. In particular I shared the recent Maori-inspired designs done in Piha (see the photoessay). Impressed, Sailor waved his hand in a sweep towards the beach below and said we were welcome to use it. Yes!

I then shared that I was interested in working with a Maori tattoo artist at which Sailor Morgan shared that his son was a ta moko (traditional tattoo) artist  and that we could find him at his home. We quickly took some aerial photos of the beach and then went out to find Lloyd, Sailor's son. We got to his home, made introductions, and asked if he were interested in collaborating. He was! We were able to print the aerial photo and right then he got to work on a design, while we filmed.

The next day we met Lloyd at the beach just before low tide. I went over his design to figure out how I would translate it onto the beach. After sharing a bit of technique, we got to work. For the next 3 hours we worked under the hot sun, with Lloyd occasionally jumping into the ocean (which I couldn't do because of a nasty cut I got the night before which required a trip to the emergency room- notice the bandage on my right finger). 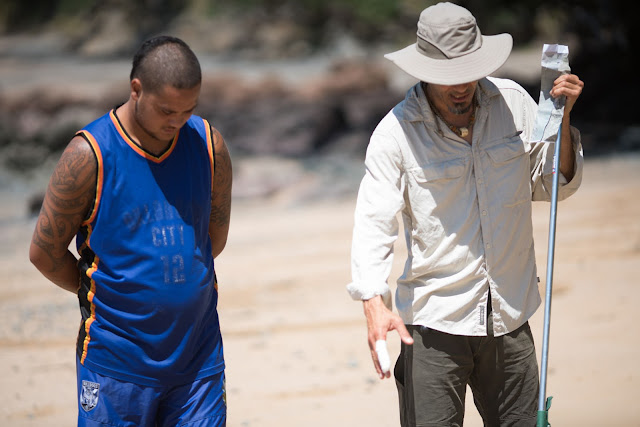 At points I would check in with Lloyd to figure out what to do as the real life translation was veering from the drawing. 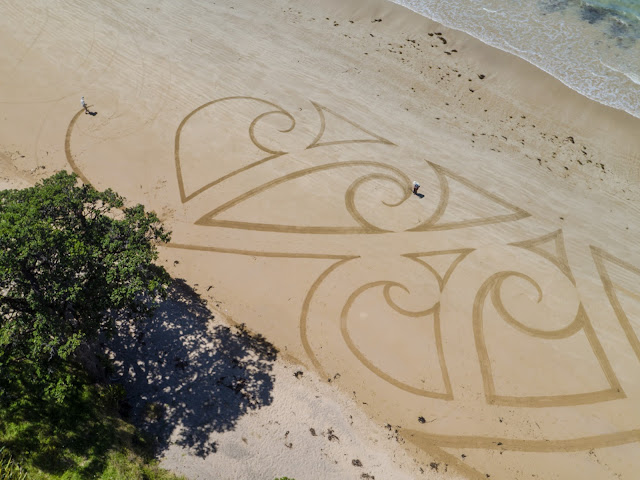 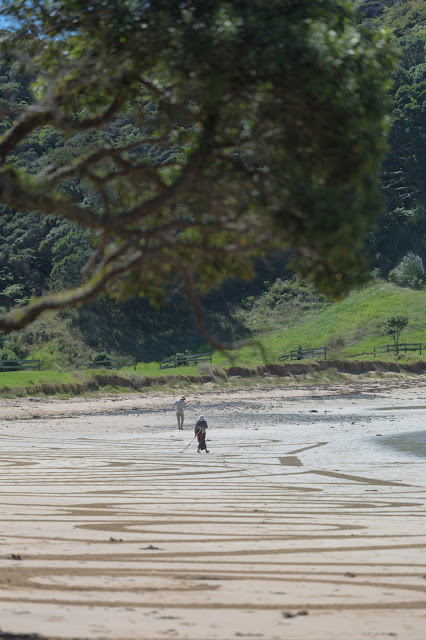 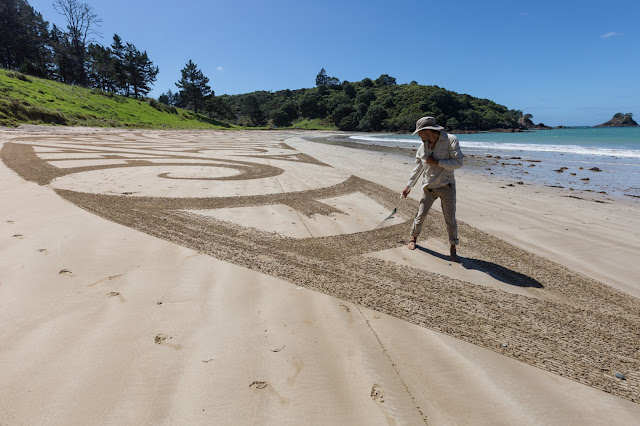 When we finished, Lloyd, who had arrived on his horse, rode through the artwork for the drone video. 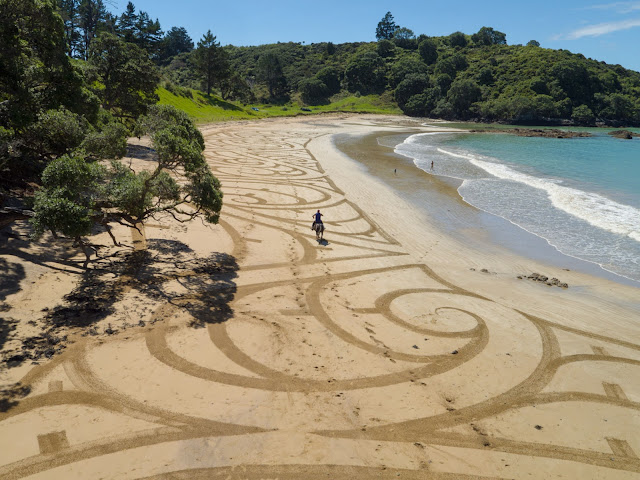 We also met Mihaka Mutunga who was there shellfishing in traditional regalia. He indulged us with photos of him walking through the artwork. 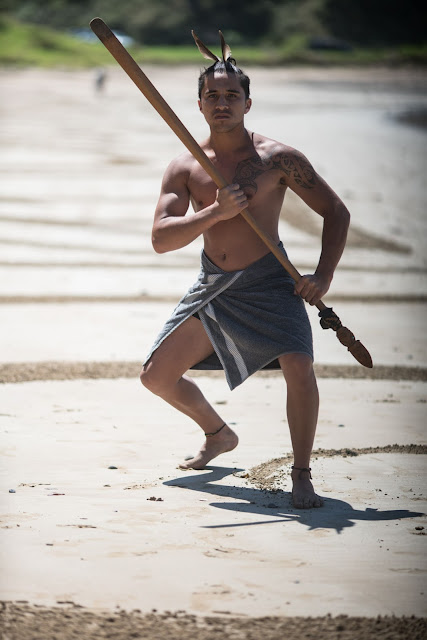 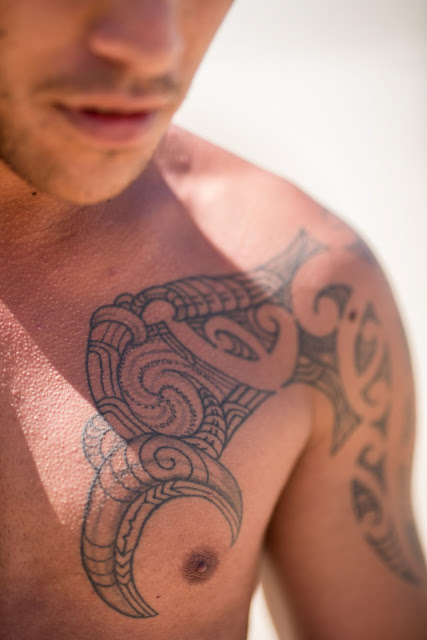 After reviewing the completed design I decided to come back the next day and try it again. First time designs frequently need a second pass. This was the first time doing spirals so large and I could see that I still needed experience.

The next day I redid the artwork with Ember (who carried Kavi on her back the whole time!). This photo got onto Facebook and exploded, bringing with it press coverage in the national papers and a clip on national TV. Cool! 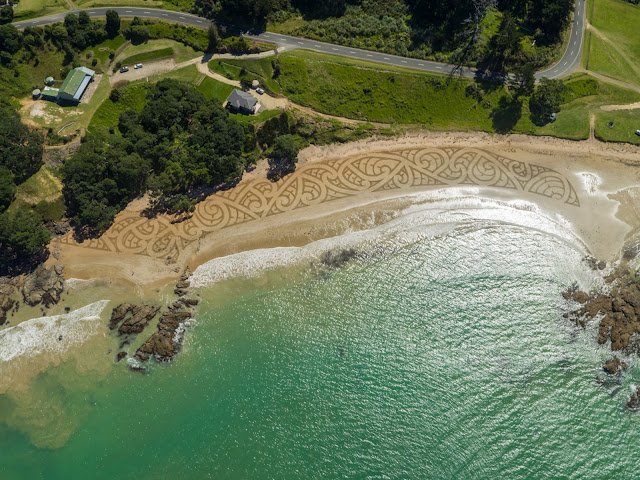 The experience I had in this project spurred within me a desire to do more, and a new project was born! In it I would travel New Zealand connecting with local artists to create an artwork on their local beaches. Kowhiwhi, the Maori style of art, which, in tattoo form is called ta moko, is a visual storytelling of the adorned, whether it is a carved pole or an arm. I saw how doing the artform on the beach brings together many core aspects of Maori people- land, identity, art. [This project is what I m working towards making a reality for a return visit :-) ]. Our next stop up northward was Maitai Bay. Jonathan scouted ahead of us and found an amazing set of beaches, which we visited the next day and set to work creating a spontaneous artwork in the short amount of time before the tide was returning. It is an explosion of koru, spirals, filling the space. 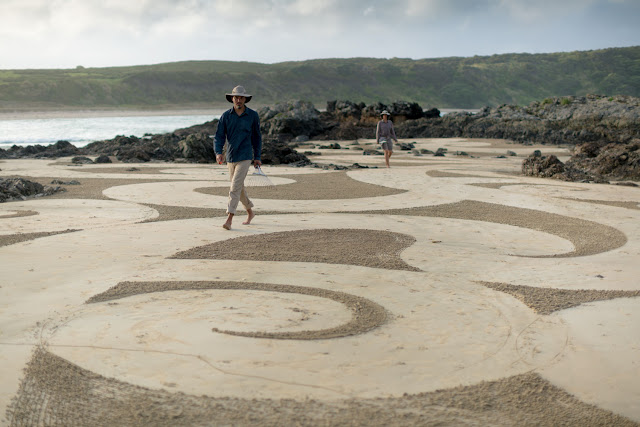 The artwork came out so well that the next day we went back to recreate it, this time with more time to work. 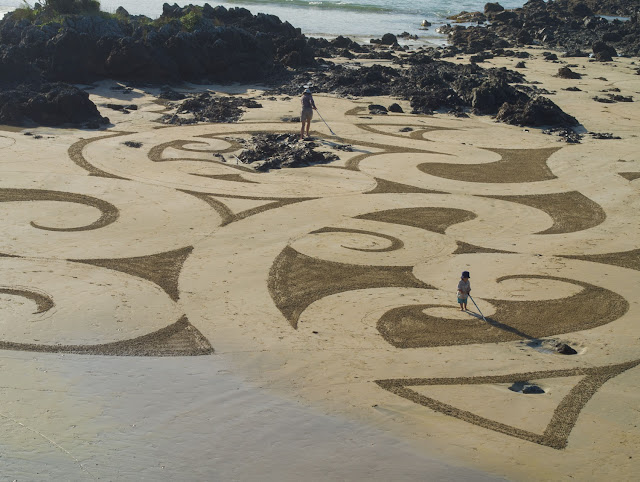 The finished piece on the second round: 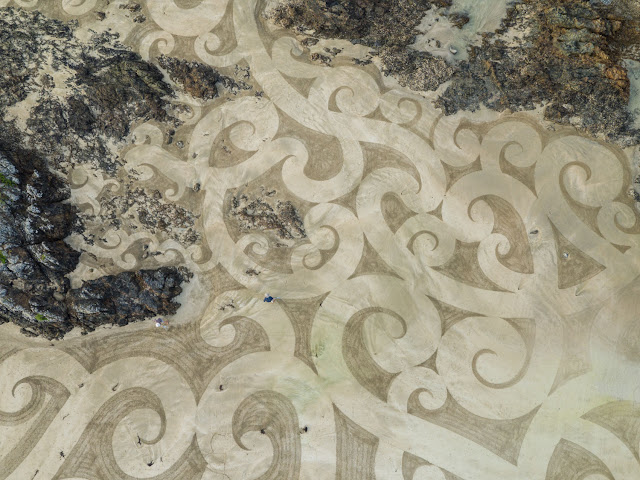 At the end a bunch of local boys showed up with their horses, giving us a picturesque ending to the day. 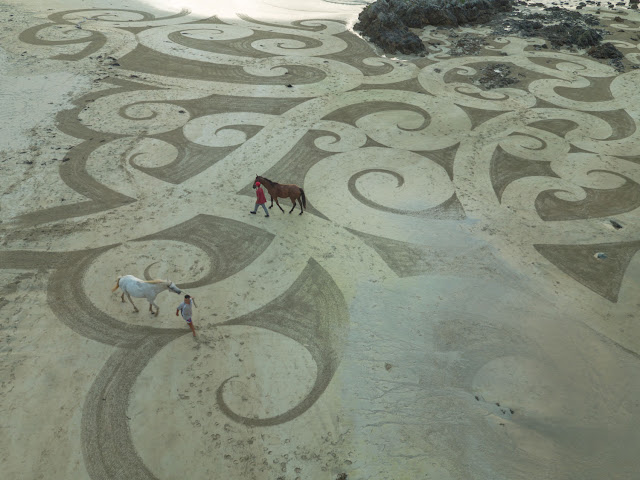 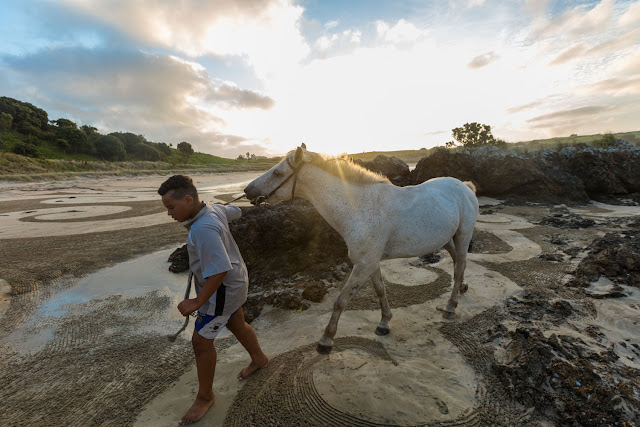 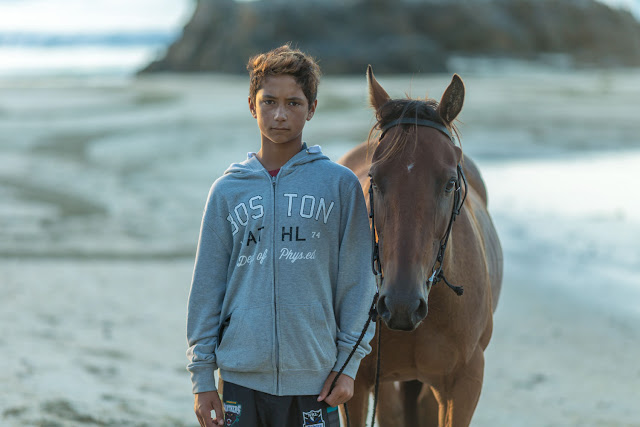 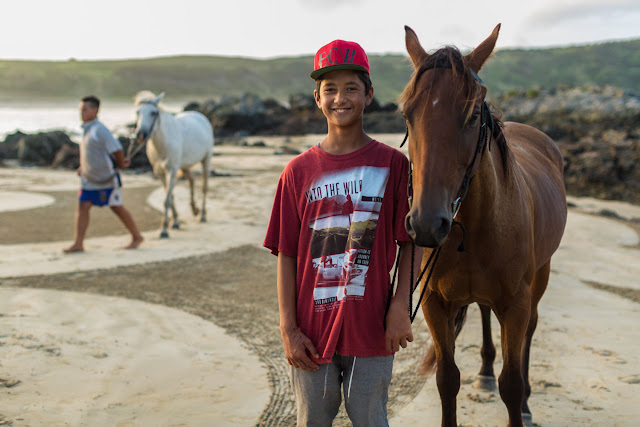 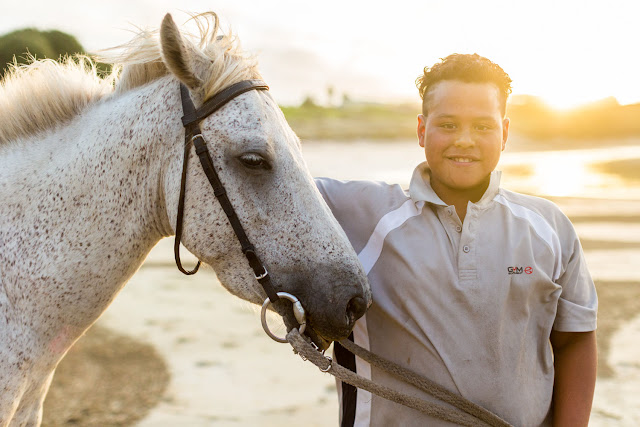 The following day we focused our attention on the next beach over. This time I was going to make an effort at a complex ta moko design. 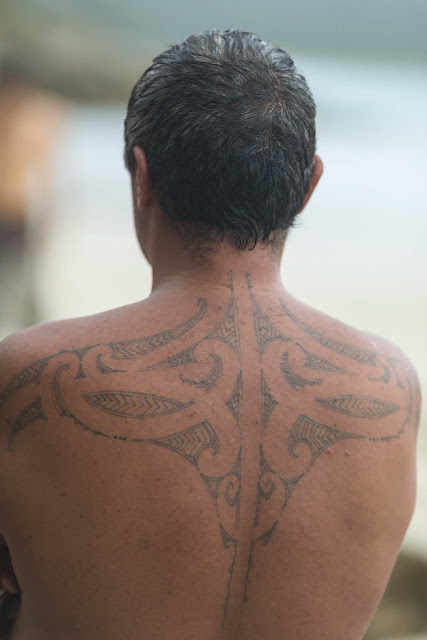 While working, some locals came to check out what I was doing, ending up helping me. 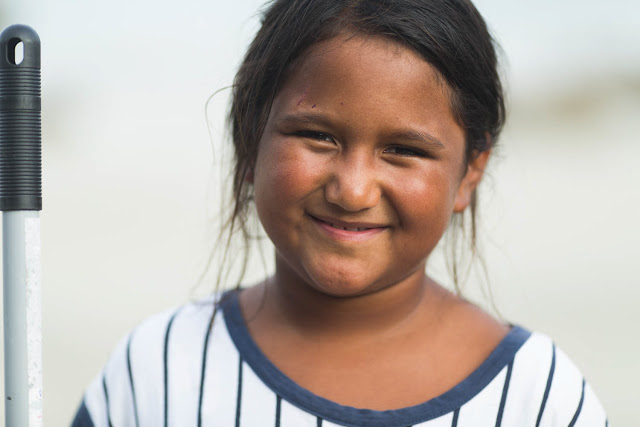 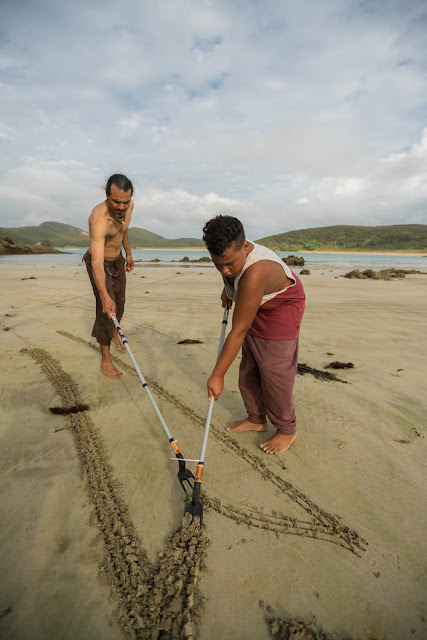 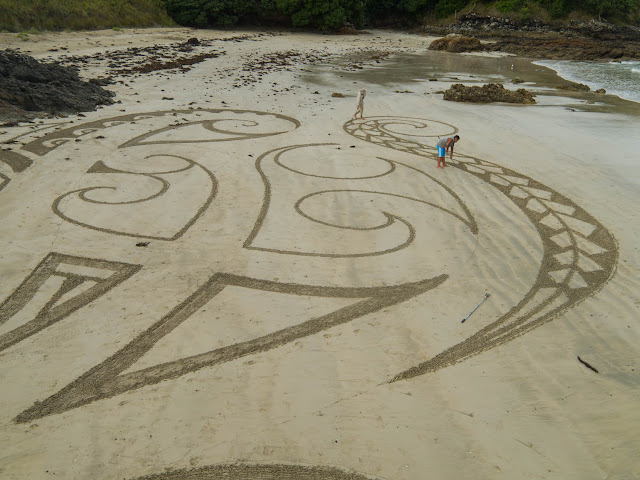 This piece had me realize just how complex ta moko can get. There were several factors impacting the work. The first was the scale- creating large sweeping curves that worked together gracefully over the course of the entire artwork. Related to scale was needing to make the parts large enough that some type of fill could be placed within. A second factor was the style itself. I could clearly see that my version was a hodgepodge of patterns that did not work together synergistically. I definitely needed to learn more about the artform.

I came back the next day to do a demonstration artwork and did another attempt at the traditional style, creating a design that worked with the rocks on the beach. But again I was shown my green-ness to the Maori arts. I shelved any efforts towards replicating the style and decided from that point onwards to do my own stylized versions of Maori art and leave the real thing to future collaborations with traditional artists.

A few weeks later, while sharing my collaboration desire with a newly made friend, a new opportunity would arise.

My new friend showed me his extensive body tattoo, that went on both legs, buttocks, back and arms- a truly impressive artwork. He connected me with the artist who designed his work and who just so happened to live near a stop coming up on our northward journey.

I met with the artist at his studio, spending several hours connecting and sharing my project. After our conversation I invited him to design an artwork for the local beach at the base of iconic Mt. Maunganui. But after consideration, he declined, saying that because he was from a different region of NZ, it would be more appropriate for me to work with an artist from the area (which is exactly what I was wanting for the larger project, but which I was letting go of for this quick pass-through in the region).

I went across to town to connect with Pohe Luttenburger, a Maori man who grew up in the area. He printed out the aerial photo I brought him of the beach and got to work.

The next day I met Pohe and his brother and son on the beach at sunrise. After a period of breaking down the design and figuring out the steps in the process and a few minutes of technique for the fellas, we got to work.

The result was spectacular, though we got hit with the returning tide before completing it.

After studying the photos we made some adjustments in the design and our technique and returned the next day to try it again.

This is what we did- a masterpiece that blends perfectly with the contour of the long narrow beach. This photo that I shared on Facebook was my highest reaching post ever- over 500K reached and thousands of shares. Clearly I was hitting a nerve and a reception.

A group of kids from a Maori elementary school joined us as we were finishing and then did a haka, a ceremonial dance, within it.

Based on how well the collaborations went and were received, I have envisioned a project in which I do collaborations with Maori artists throughout New Zealand. I am currently working on the funding side, committed to returning within 6 months to cotinue this amazing projecct.

Here are a few random pics taken along the journey... 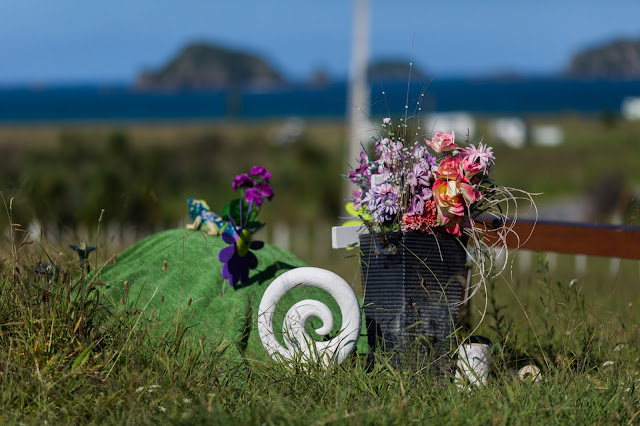 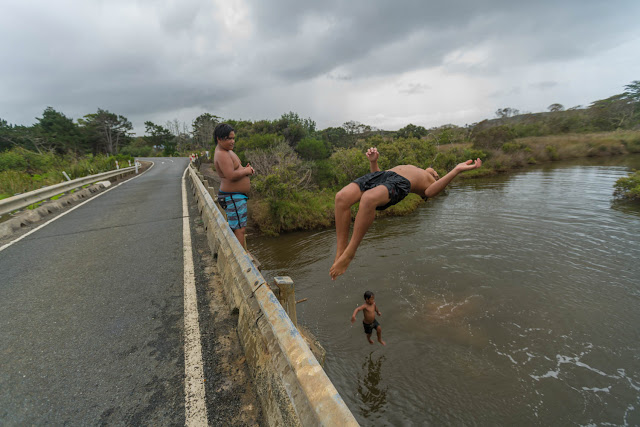 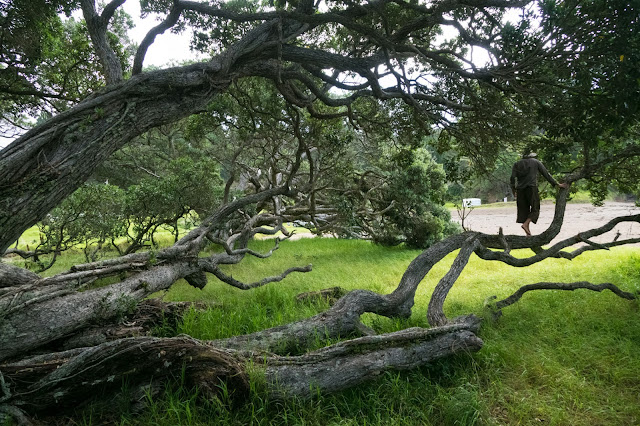 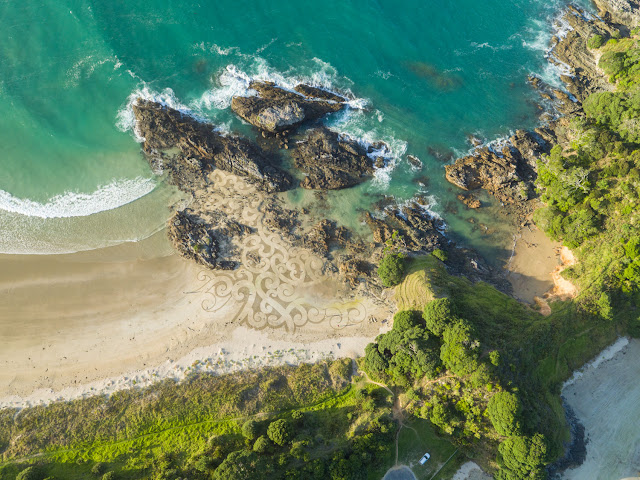